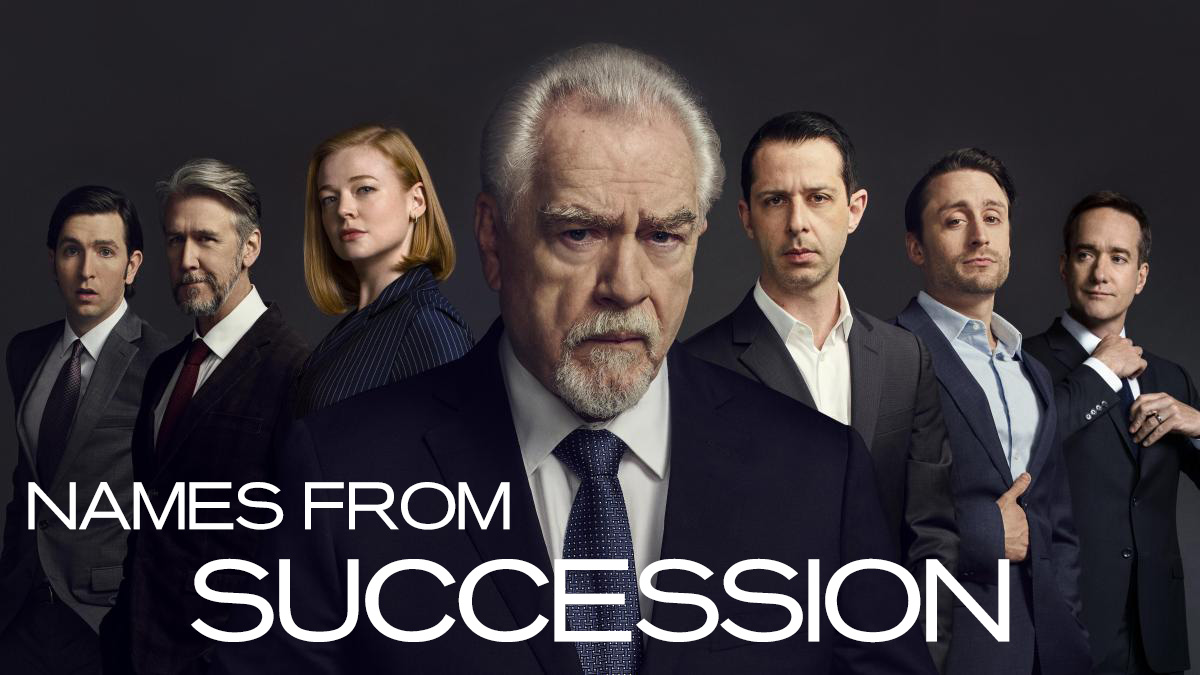 Succession is one of the sleeper hits of HBO Max since, well, probably The Sopranos. In fact, there are many similarities in the two series: Succession is a drama about a family-based business where almost every character is morally corrupt. But it’s written and filmed so beautifully, you can’t look away. Debuting in 2018, as of this writing Succession just finished its third season.

One of the things I love about Succession is the attention to detail, even down to the characters’ names. Creator Jesse Armstrong was very intentional when he chose names for these fantastic, multi-dimentional characters.

Logan Roy – The patriarch of the Roy family, played by Brian Cox. The premise of the series is set in season 1, episode 1: Logan’s health is failing and he has to choose a successor from one of his four grown children to take over the company. The family’s surname is incredibly apropos, as Roy means King or Ruler. It’s the root of the word “Royalty” and suits this family well, as they are supposed to be royalty of the corporate-and media- worlds. A cross between the Hearst and Murdoch families. The character Logan Roy was born and raised in Scotland, and therefore has a traditionally Scottish name meaning “Little Hollow.” Armstrong might have chosen that particular name due to Logan’s lack of empathy and “hollow” heart.

Connor “Con” Roy – Connor, played by Alan Ruck, is the eldest Roy sibling, but often the outcast as he was born of a different mother than his three half-siblings. Called by the nickname “Con,” this successor feels entitled to be a part of the company, but is generally disconnected from it. His ambitions lie in politics. Connor is an Irish name meaning “Descendent of the Hound” or Desire. This is where nicknames first come into play, as he’s depicted almost as a “con” of a child, a “con” of a successor as he never has any idea what’s going on.

Kendall “Ken” Roy – Kendall, played by Jeremy Strong, is the frontrunner for succession, always seeking his father’s approval both personally and professionally. He plays at being the strong businessman while his personal life crumbles and he has to be constantly rescued and supported by his father. I have to believe that his name is a play on the “Ken Doll” – Barbie’s love interest. The picture-perfect doll groomed to step into Logan’s shoes, but never quite measuring up. Kendall is an English name, meaning “from the Valley of the Kent River.” I believe this name was used more for its association with the Ken doll rather than its etymological meaning.

Siobhan “Shiv” Roy – As the only daughter, Siobhan Roy has to work twice as hard to earn her father’s trust as a candidate to be the successor. Played expertly by Sarah Snook, Shiv is quite cutting and scheming, often without saying a word. But she’s proven that she will cut her husband’s heart to pieces, just for the fun of it. A “shiv” is prison vernacular for a sharb stabbing object, like a hand-crafted knife. The Irish name Siobhan is a feminine form of Sean (John) meaning “God is Gracious.” Will God be Gracious to this successor?

Roman “Rome” Roy – Roman, played by Kieran Culkan, is the baby of the family. He’s an immature imp, yet desperately strives to get in on the succession race and prove himself to his siblings and father. Rome is irresponsible and inappropriate, but has the ability to bring a millenial perspective to the old-school corporate structure – that’s his superpower. Roman’s name is a reminder that family empires go all the way back millenia to the Roman empire. In fact he’s reminiscent of Octavian, Julius Caesar’s adopted son, whom Caesar named as successor when he was only 18.

Tom Wambsgans – Tom is Shiv’s husband, and an executive in Waystar, the Roy’s family business. Early in the series, Tom is promoted from heading up the amusement park and cruise divisions to running ATN, the company’s global news network. Wambsgans is an actual German surname, meaning “to waddle while walking.” I don’t really have a reason why this unusual surname was chosen for Tom, but perhaps because it’s so opposite of easy-to-spell, easy-to-pronounce Roy, that it’s obvious Tom is not part of the family.

(Cousin) Greg Hirsch – Greg is a second cousin to the Roy siblings, as his grandfather is brothers with Logan. Greg is an innocent puppy-like creature who comes to Logan for a job fresh out of college. The name Greg/Gregory is from the Greek meaning “Watchful, Vigilant” and that’s just what Cousin Greg does in most every scene in the series. He watches, observes, and is fascinated with this kingdom as he maneuvers his way through and into it. Some internet pundits think Cousin Greg is the dark horse and might just be the surprise successor. What do you think?