I’m a huge fan of the show, huge fan. And because I’m a name-o-phile, the unusual character naming convention on SUITS (USA Network) did not elude me. As a lay person, you may or may not have noticed the major faux pas the writers made upon naming the characters in the SUITS world. If you’re not quite sure, check out our Character Naming Tips (numero uno).

But the most interesting thing about the character names on SUITS is that they work! Yes! They work splendidly. But why does breaking one of my cardinal naming rules work in this situation? For many reasons that I will delineate…keep reading!

OK, if you’ve flipped over to our tips and back again, you’ll have already understood that the character names are not age-appropriate. In fact if you take just sample the names from the series–Harvey, Donna, Louis, Harold, Mike, Jessica–you’ll notice that they should belong to characters that are decades older. But in SUITS, the names fit. I mean, really, no matter how many times she says it, I still get chills: 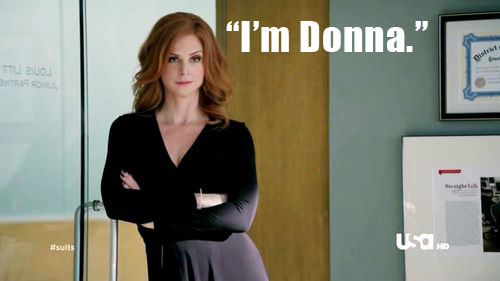 In a previous life (not really, but about twenty years ago) I worked in one of the largest law firms in the world. In those five excruciating years I gained an understanding of the culture, caste system, and characters. The reason why the Mad Men-era names work in the contemporary SUITS world is because law firms are a throwback. They are old-school, buttoned up, good ol’ boy networks. Still. Even the title, SUITS, is a symbol of that ideology. A law firm is one of the few places where the employees still wear suits. Corporate law is the backbone of Big Business. Simply, the out of date names work because a lawfirm is a century-old institution with tradition and meaning. Pearson Specter Litt even proves that they are entrenched in tradition by hiring only from Harvard, the oldest institution of higher learning in the United States.

So let’s break it down, name by name, and I’ll show you why the SUITS naming convention actually works.

Harvey Specter – Harvey is one of those names you rarely find in men under sixty. At first, I was perplexed at why the writers named their number one character Harvey, as he’s meant to be solid, a fighter, a rock. Harvey is not a particularly masculine name, with its soft consonants and a diminutive ending. I personally know of only one Harvey, one of my dad’s besties who is now in his eighties. I also think of the big rabbit from the play and movie of the same name. Again, not very masculine for such a strong character.

The name Harvey has not been ranked in the top 100 baby names since 1940, and if I were to meet a Harvey under fifty today, I would assume he was named after his father, who was then named after his grandfather.

However, by the end of the first season the name seemed perfect for the character. We find out he is hard on the outside, and a true battle warrior, the meaning of the name. We also find that Harvey Specter has a soft core, and that’s the arc of his character throughout the series–finding the teddy bear inside.

As for his surname, that’s a little more mysterious. A spectre is a ghost. Does this make Harvey more of an enigma? In the five seasons since its pilot, Harvey has been a bit of mystery, until he goes into therapy and we find out his backstory.

Mike Ross – Michael has been a steadfast and popular name for decades. It is a Biblical name, and Biblical names tend to stay incredibly popular on the boys’ side of the charts. It was the #1 boys name from 1954 to 1998 (with the exception of 1960 where it was beat out by David), and still ranks #7 in the 2014 charts. But Mike Ross is rarely called Michael in the show, he’s only referred to as Mike. But you may have noticed that Mike Ross is most often called by his full first and last name, especially by Harvey, Jessica, and Louis.

So I spoke the full name aloud and came up with a theory of why they use his full name so often in the dialogue. What does “MikeRoss” sound like when said together as a phrase? Perhaps it’s meant to be a homophone of “My cross.” Mike is often Harvey’s savior, and conversely, Harvey’s cross to bear.  If Mike’s secret is found out, Harvey could be convicted of fraud. Disbarred. Mike also becomes the burden (cross) of Jessica, and eventually Louis. 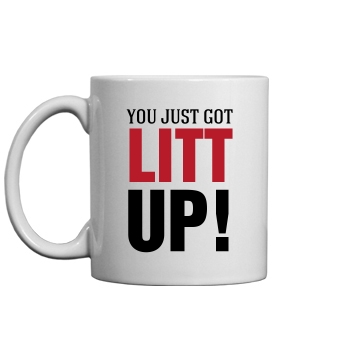 “You just got LITT UP!” I love how the writers play with names, and it shows that they have taken great care in creating monikers for their cast of characters. Louis is another name that is not very common in men under sixty, unless named after their fathers. Take, for example, Louis C.K. (real name Louis Szekely) who was named after his father, Luis Szekely. Louis Litt is almost a slimy name, when you say it aloud. The alliterative L sounds combined with the s makes you almost hiss the name. Another juicy name tidbit: Louis Litt’s British “counterpart” nee antagonist, Nigel Nesbitt, also bears an alliterative name and his surname ends in the same three letters.

Jessica Pearson – Like the name Michael, the name Jessica has stayed pretty consistent throughout the years, for Caucasians. The actress, Gina Torres, is multiracial/Cuban. In the show, I believe Jessica is portrayed as Black. I’m not saying there are no African-American Jessicas out there, I’m sure there are. But it’s a rare name for Blacks in the U.S. I would venture to guess that the character was named before it was cast.

This is also true for Jessica’s love interest on the show, Jeff Malone, played by D.B. Woodside. Malone is an Irish surname, also rare for African-Americans. This Jeff Malone could be part Irish, and/or he could be adopted, or his father could’ve been adopted, as we never get his backstory.

Back to Jessica. I would have advised against giving similar surnames to three major characters on the show, and I’m not quite sure why it was done. But Jessica Pearson, Daniel Hardman, Donna Paulson, Harold Gunderson, and Stan Jacobson all have surnames that end in the same sound. The names Pearson and Paulson are so similar, I wonder if that was done intentionally to equate the characters. Is Harvey’s secretary just as important as the managing partner in the firm? She actually proves to be just so.

Rachel Zane – Rachel, like Michael and Jessica, is another Biblical name that has stood the test of time and historically used for Jewish females. The name stayed in the top 20 from 1983 to 1999, making it completely age-appropriate for a woman in her twenties. The character’s surname, Zane, was probably chosen because she is a calm, intelligent and “sane” character.  Rachel serves as Mike’s conscience, his voice of reason. She is why he stays “sane.”

But Zane is a Semitic surname, and, combined with her first name, I believe the character was most likely meant to be Jewish, until the wonderful Wendell Pierce (The Wire, Treme) was cast as her father. In fact, Rachel’s ethnicity is never mentioned on the show until Robert Zane comes onto the scene (“What, you’re surprised my father is Black?”) Nevertheless, I may have balked at a black Rachel since, like Jessica, it’s a rare name for African-Americans. But I can accept that a biracial woman of that age would be given the name. Note: Meghan Markle, like her character, is also biracial; her mother is Black and her father is of Dutch and Irish ancestry (hence the name Meghan).

Some other wonderful SUITS names:

By the way, if you are a SUITS writer or show creator and would like to officially refute or corroborate the above, feel free to email me.